“Art is the queen of all sciences communicating knowledge to all the generations of the world.” - Leonardo da Vinci

Art Reception - Off the Page

“When you read a comic book, there’s a space between what’s happening on the panel and what you have to literally see in your mind” -- Ta-Nehisi Coates

Cartoons, comics, and illustrations have come a long way from their inception. Created originally for mass consumption and viewed as “low-brow”, today they make us laugh, captivate our imagination but are also taken seriously. They have become a voice for…
Cafe 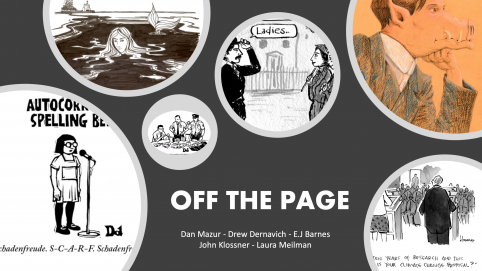 “When you read a comic book, there’s a space between what’s happening on the panel and what you have to literally see in your mind” -- Ta-Nehisi Coates

Cartoons, comics, and illustrations have come a long way from their inception. Created originally for mass consumption and viewed as “low-brow”, today they make us laugh, captivate our imagination but are also taken seriously. They have become a voice for social change, personal expression and a platform for political action—they are no longer confined to the realm of storytelling.

Our exhibit Off the Page documents this evolution. The artists we feature utilize novel combination of words and pictures-- the essential element of comics and cartoons-- to create fluid and inspiring narratives.

We invite you to join us at a reception for the artists featured in Off the Page. Come visit us on September 30 to meet the artists, view their work and hear the inspiration behind their art.

Her work has appeared in numerous comics anthologies, notably both volumes of Colonial Comics: New England, 1620-1750 and Ninth Art Press Anthologies Sub-Cultures and The Greatest of All Time Comics Anthology. Her comic books may be found at comic book specialty stores across the United States. Her award-winning animated film, Leatherwing Bat, has shown in film festivals across the United States, as well as in Canada and the Bahamas.

Barnes is a graduate of Harvard University (A.B. Chemistry) and the School of the Museum of Fine Arts. Her experience as a software engineer has informed her approach to illustration and graphic design. She maintains her studio in Cambridge, Massachusetts.

Drew Dernavich
Drew has been drawing cartoons for 25 years, as a regular contributor to the New Yorker magazine and Esquire magazines, among others, and now online at wired.com. He has a Reuben Award for best magazine cartoonist to his credit, as well as honors from the Massachusetts Press Association and New England Press Association from his work while living in the Boston area. Drew continues to work as a real-time graphic facilitator and visual note-taker for corporate projects, having worked with such companies as Johnson & Johnson, Google, Amazon Web Services, PwC, and the Gates Foundation.

Drew’s second children’s book, “Elvin Link: Please Report to the Principal’s Office,” about a young boy with graffiti-esque drawing habits, will be released in March 2020 by Henry Holt/Christy Ottaviano Books. He lives in Brooklyn, NY where he is proud to be a volunteer member of the Ink Well Foundation and is proud to annoy his friends by preferring to root for Boston sports teams.

John Klossner
John Klossner’s cartoons and illustrations have appeared in The New Yorker, The Wall Street Journal, The Reader’s Digest, NARRATIVE Magazine, Computerworld, and all the other places fine cartoons can be found. He lives in Southern Maine with his family and talking dogs.

Dan Mazur
Dan Mazur grew up in Cambridge, Massachusetts. In 1983, he relocated to Los Angeles to work in the motion picture industry, then in its infancy. After 23 years on the west coast — including 17 in Topanga Canyon, California — he moved back to Cambridge, where he turned his attention to the art of comics. He has since become a household name at his house.

His comics have been published in various anthologies through Ninth Art Press, he is also involved with Boston Comic Roundtable and MICE.

Laura Meilman
Laura Meilman is a fine artist and cartoonist based in Cambridge, MA. She studied painting at Earlham College, Illustration at the School of the Museum of Fine Arts and now makes a variety of work including comics, zines, illustrations, and paintings. She strives to tell stories through her artwork no matter the medium and is greatly inspired by history, both societal and personal. The inspiration for Mermaids for the Environment came from the popular online drawing challenge #Mermay in which artists draw mermaids during May. She believes mermaids would have strong feelings about the state of water today. You can find her next as part of a group table at MICE (the Massachusetts Independent Comics Expo) in October of 2019.